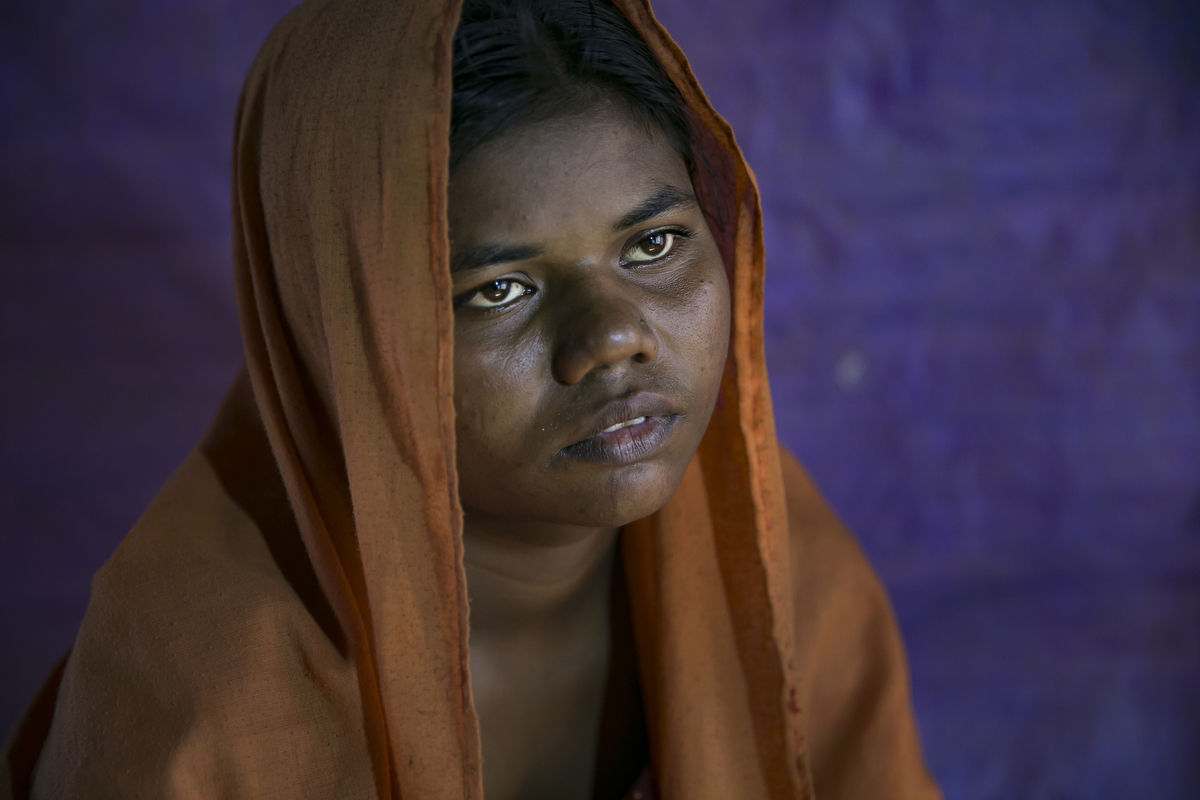 COX'S BAZAR, BANGLADESH - DECEMBER 01: Minwara Begum, 17, poses for a photo December 1, 2017 in Cox’s Bazar, Bangladesh.. She fled to Bangladesh shortly after the August 25th attack from Tula Toli village in Myanmar. One morning she was cooking when she heard shooting. Her mom went out to see what was happening and saw the military throwing petrol bombs on all the houses. "All of us started running and the military shot us in the back. They shot me, my mom, sister, sister in law, nephew, 2 of my brothers. I lost 6 members of my family. I just kept on running. The military found us where we were hiding and took me, my sister and cousin and other women to a house. They tied our eyes and legs and hands with a black cloth and started to rape me. I don't know how many men raped me. There were 6 of us in the room and they killed 3 of the women. When they were finished they left the house and threw a petrol bomb on it. The whole house caught fire and I used the fire to burn the cloth off that was keeping my legs and hands tied. I tried to help the other women in the house escape, I tried to carry them, but I was too weak. I crawled out through the small chicken door and hid in a paddy field. The other 5 women in the house all burned to death.” For days she hid in the paddy field and forest until a group of other people came through and helped her. She spent days walking with them to the Bangladesh border, where she took a boat across to Bangladesh. She spent a week in a hospital in Bangladesh until she recovered. "Here in Bangladesh, I feel so restless and worried. People say they're going to send us back to Myanmar, and once again they'll shoot and beat us there. I'm so worried." she says. "They did these things to us, they raped us, I'm not afraid to talk about it. I don't feel ashamed to tell the world. I want justice, but I know the world cannot give me justice. If there's anyone who could give us justice, it would have happened a long time ago.”

Human Rights groups have reported of widespread rape and sexual assault on Rohingya women and girls by Burmese security forces during the violence in Myanmar's Rakhine State. According to reports, more than half of the survivors of sexual assault receiving treatment by humanitarian organizations in refugee camps at the Bangladesh border are below 18 years old. The United Nations human rights chief, Zeid Ra'ad al-Hussein, said on Tuesday that Burmese security forces may be guilty of genocide against the Rohingya Muslim minority during a session in Geneva, adding international pressure on Myanmar to be investigated for crimes against humanity.(Photo by Allison Joyce/Getty Images)