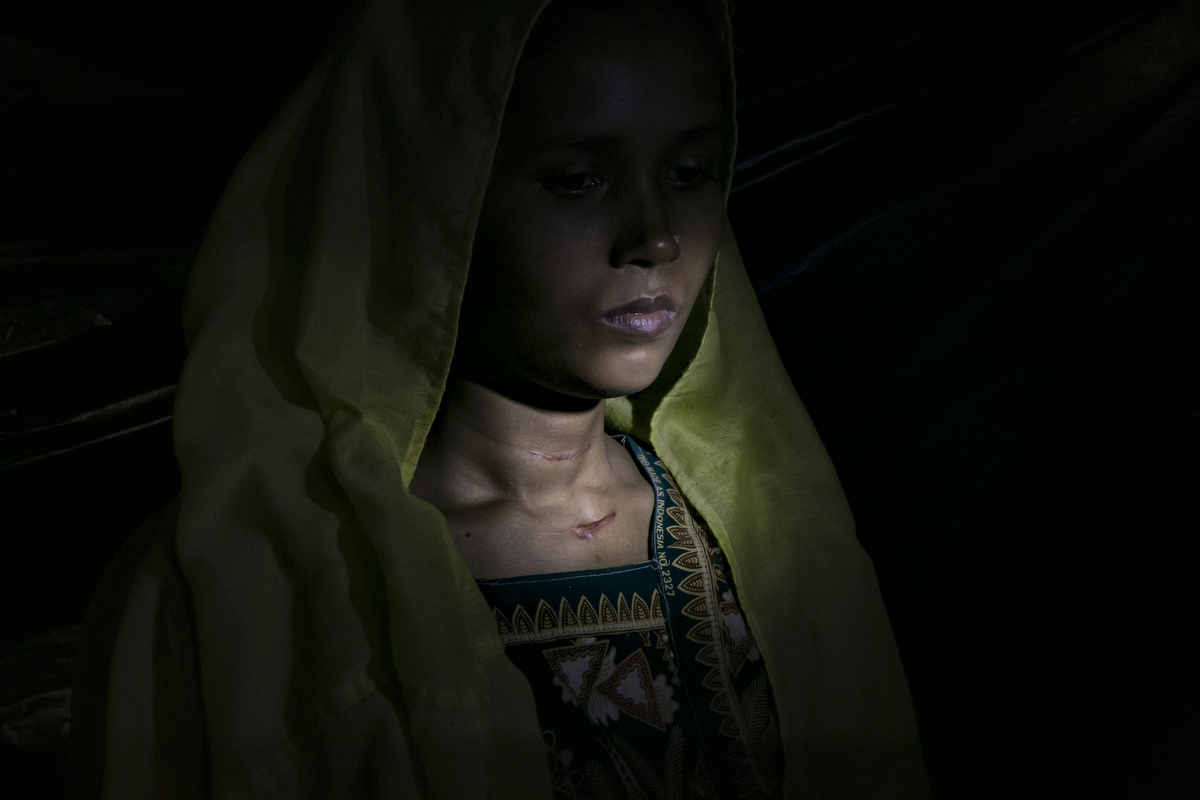 Roshida Begum, 22, poses for a photo in Cox’s Bazar, Bangladesh.. She fled to Bangladesh shortly after the August 25th attack from Tula Toli village in Myanmar. One day the military came to her village and threw petrol bombs and set houses on fire. They randomly shot anyone they say. She fled and hid on a riverbank, where the military found her and other people. Her husband swam across and escaped. They shot the young boys and stole the jewelry the women had. “They took little children and babies and threw them into the river. Then they took us to a pond and made us kneel up to our necks in the water. A helicopter was circling overhead again and again.” she says. The military took groups of 4-5 women into houses and raped them. “My baby was 25 days old, they grabbed him from my arms and smashed him on the ground so hard, he died. The military took me and 5 other women into a house and raped us. After they were done, they slit our necks with machetes. They thought I was dead and they left and set the house on fire. I was the only one who escaped." She says. She hid in a paddy field and in a forest until she came across another woman and her daughter, and together they crossed into Bangladesh. For 8 days they walked, surviving by drinking water from the paddy fields. They took a boat into Bangladesh and she went to the MSF clinic, where she spent 18 days recovering. Her husband found her there, and when she was discharged they moved into a camp. In the attack, she lost her mother, father, brother, all together she lost 17 members of her family. "In Bangladesh, sometimes I'm happy, but then I'll see an old man and miss my father, or I'll see a woman with a baby, and I'll miss my son. I can't help but cry. I want justice from the world, why did they kill my mother and father and sisters? I hope the world will give me justice. They killed my parents and relatives for no reason.”